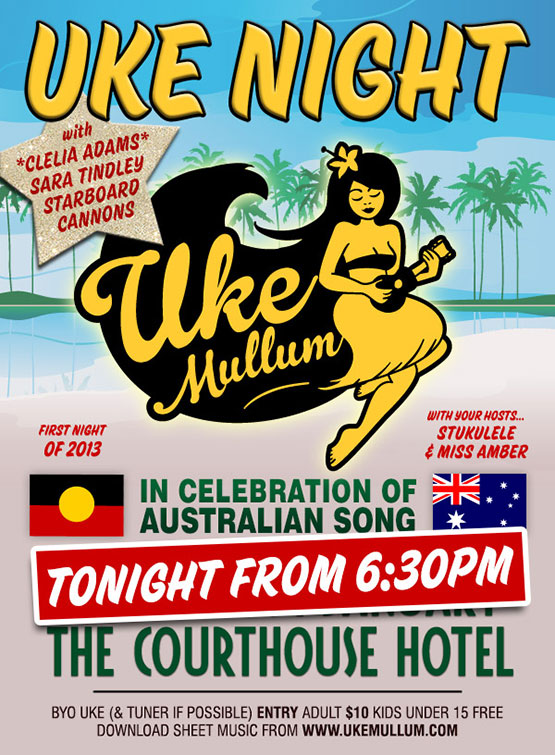 For the first Uke Night back in 2013, we followed suit from last year and paid homage to being Australian. The night turned out to be much more of a celebration than the actual Australia Day which was the beginning of a 3 day storm thanks to ‘ex-cyclone Oliver’ who took out trees and caused week long power outages all round the region.

The first set was dedicated to traditional Australian songs and featured two tunes with some of the Northern Rivers Uke Orchestra followed by songs about not having any beer then drinking too much. Stu introduced the house to a great, though lesser-known Australian singer songwriter, Steve Appel who has released 6 albums of quirky and wonderful songs under the name of King Curly. We played a version of A Good Song. Stu learned what it’s like to wear out his voice as he sang the whole first set himself, though was ably assisted by son Reuben who whistled on Waltzing Matilda.

Miss Amber sang a great version of Kylie’s ‘Can’t Get You Out Of My Head’ which was greeted with rapturous applause. We were then treated to a visit by Clelia Adams who lead her awesome train song River Valley Express which was # 1  for the 3rd week on the ECMA (European Country Music Association) charts. Uke Mullum favourite Kathryn Jones was also in tow, the pair had literally just returned from Tamworth and were in very fine voice. The song is so great for the region as it has all the names of all the towns… “Mullumbimby, Billinugel, Stokers Siding too…”

It was so great to have Sara Tindley back again to lead Took the Children Away by Archie Roach and My Island Home and Black Fella White Fella by the Warumpi Band. Sara has the ability to focus an audience’s energy with her own pure grace… a wonder to behold. Then the boys Ash and Matt from Starboard Cannons took the stage for their instant Aussie classic Bowen Station, a duet which was recorded with Sara. This was a very special moment. After Paul Kelly’s Dumb Things, Poor Ned, I Still Call Australia Home and Stu’s personal favourite The Real Thing it was time to start preparing for next month.

Big thanks to all the special guests, Deb on the door, Dave Sanders on drums, Rod Coe on bass, Luis Christia on sound with Warren Thompson stepping up and taking care of the screen scrolling duties. Thanks to the Courthouse Hotel… most of all thanks to all of you who came.