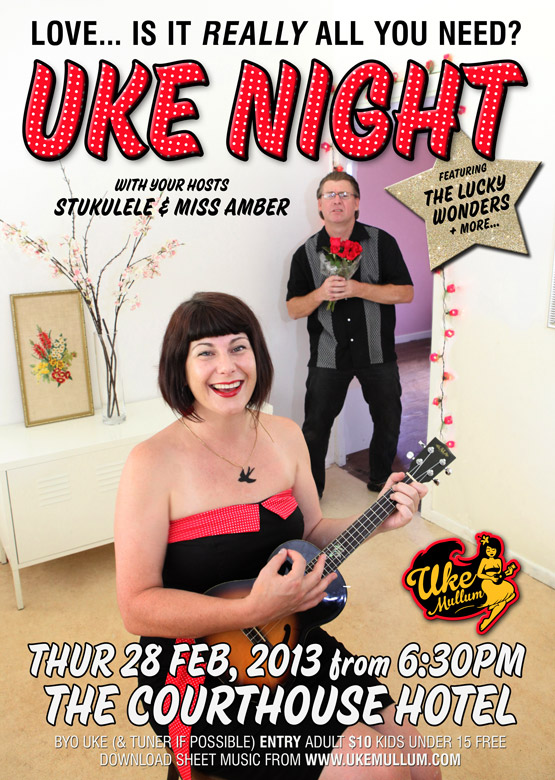 It was The Valentines Is Over Special… this year (like last year), we mapped the arc of a relationship in song. From the first kiss to breaking up and crying at your own party though eventually, after being torn apart we all came to except crazy love as something we can’t live without.

We had Michael from Gold Coast Ukuleles up early in the set with a fine version of ‘I’m Yours’ (Jason Mraz).  Stu did well leading many of the tunes… he was out to impress as his parents attended this uke night (for the first time) … BJ Thomas’ ‘Somebody Done Somebody Wrong Song’ went down well as the first song back after the Break. (Betina Moyle-Bryson won the Lucky Door Prize), Then Rosie Eadie tackled the Birdy version of ‘Skinny Love’. Miss Amber was in fine voice with excellent versions of Beyonce’s ‘Irreplaceable’ and Pink’s ‘Who Knew’.

Then special guests Jesse and Emma from the Lucky Wonders graced the stage with 2 of Emma’s songs followed by their version of Leonard Cohen’s ‘Dance Me To The End of Love’. Miss Amber delivered a faultless version of Crazy Love with Jesse and Emma relishing their first ever chance to be doo wop girls. Then the secret tune even got an airing… Tim Roger’s ‘My Heavy Heart.’

Rod Coe on bass, as always was the backbone of the evening with some very expressive and most awesome drumming from new comer Brendan Drinkwater who bought in his entire kit (much to Stu’s delight). It was good sized turn out considering the deluge of rain we had all month (which is continuing even as I type). Great sound from Luis Christia, superb scrolling by Skye Stenning, great backup Uke by Chad Sheather..  Thanks to Deb on the door. and a big huggy thanks to all who came along to make the night… such a great way of coming together. See you next month.