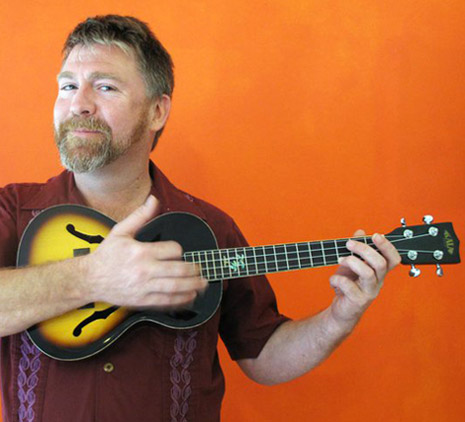 Uke Mullum is the handy work of  Mullumbimby resident – Stukulele who first began giving music a real good go at age 13. The first passion was for the drum kit, which has enabled Stu to tour with different projects to places around our planet near and far. Stu also studied some piano and music theory, leading to guitar, with which he has been known to occasionally perform live and write songs.

After about 6 months of tinkering about, learning the chord shapes and having loads of fun, Stuke became the ukulele teacher for grade 4/5 at Mullumbimby Public. The first lesson involved tuning 30 brand new Mahalo Ukes by ear for 2 hours for a total of 60 age 8/9 year old students. Needless to say not much was achieved. When It was worked out to take smaller groups for less time, magically results were obtained. All the groups were joining up synapses, making music and having fun in no time at all and Stuke was loving it!!! By the end of  the term, there was 6 accomplished ‘Kings Of Ukulele’ performing 2 tunes with an all girls choir at the schools November fair.

So, look no further for Private and Group Classes for ukulele in and around Mullumbimby!! Stukulele’s method really works, 99% of students can play one or more songs within the first hour lesson.

If you have a yearning to speak the true language of love, don’t wait another heart beat. This is your best way forward. You never know where it will lead you. Music really does give you wings.

PS: Somewhere in among all this, UKE NIGHT at the Courthouse Hotel in Mullumbimby was born for Stukulele’s students to have a place to play. These nights have proven to be very popular and have a good sized regular attendance of 70 to 200+ people and have since moved to the auditorium in the Ex Services Club – Club Mullum. For more info on Mullum’s UKE NIGHT click here.

The Next Meeting is on Sunday July 25th, 2021
For our 10th Birthday, the theme is The Letter E, songs by artists whose first name begins with the Letter E.

One thought on “Uke Mullum”

This site uses Akismet to reduce spam. Learn how your comment data is processed.