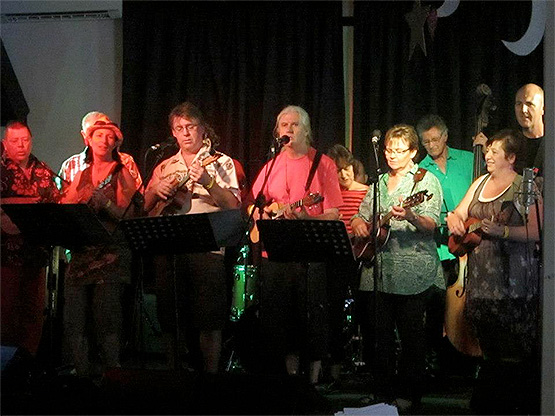 As always The 2012 Mullum Music Festival was an amazing event. Such diversity of music and talent… a smorgasboard of styles and vibes. The feeling of freedom and community love this festival creates is unique. Well done Glenn Wright and team… you’ve done it again.

First appearance of the ukes was during the opening night Gala. Stukulele went to hop up on the little stage with MC Mandy Nolan who hastily berated Stu with “what do you think you’re doing?” She went on to inform Stu and the audience that “the ukes can’t just show up and play where ever they like… any way what’s so special… anyone can play a uke…”. She demonstrated this by picking ‘random’ people out of the audience who could adequately play. Stu was handed back his uke and replied with the riff from Miles Davis’s ‘So What’… suddenly 10 people from the audience stood to play the answering chords and swarmed the stage like Uke playing cockroaches. When they had all assembled the Northern Rivers Ukulele Orchestra performed ‘Tijuana Taxi’ to the delight of the bewildered crowd. A great moment. (during the festival The NRUO popped up unannounced in various locations each day and performed their set for smiling onlookers.)

On Saturday Stukulele and Miss Amber’s Chocolate Wheel was a lot of fun though might have been better attended if it the venue was mentioned in the program…whoops. Festival artists and patrons alike delighted in the prize money donated by The Ex-services club and the onlookers had a good ol’ sing along. The chocolate wheel itself seemed jolly to receive so much attention as the patrons gave her a spin after the show had finished.

Come Sunday and the Ukes were out leading the Street Parade… The brass and drums drown out just about everything though there was a rendition of ‘Tijuana Taxi’ performed as the parade halted for a moment at the Courthouse that was slightly more audible. Then, at 1pm back home in the Courthouse, the Uke Mullum Troupe played a ‘best of’ set including songs lead by Rosie Eadie (Paris Unicorn), Miss Amber & Stukulele lead a few, Peter Haddock (Ain’t She Sweet Melody), Sue Stenning (Make You Feel My Love) followed by the official festival debut of The Northern Rivers Uke Orchestra. The stand out was ‘Paint It Black’ which thrived with the addition of Rod Coe (Bass) and Jason Caspen (drums).  It was very stirring… Pete Haddock nearly popped a vein delivering his best ‘Mick Jagger’. The set was then topped off with “All You Need Is Love” and ended with smiles, laughter and great applause.

Can’t wait for next year!