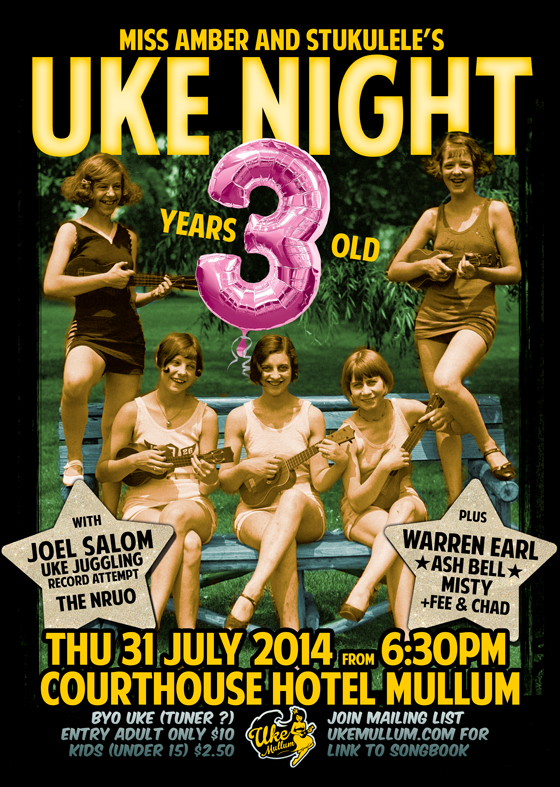 With the apt theme of ‘3’ we had such a great time for our third birthday… Rod Coe on bass, Jason Caspen on drums and Evan Sun on stringed things. All the important folk who have helped these nights to be so great were there. The Northern Rivers Uke Orchestra kicked of the night… we are still working on amplifying the sound of the orchestra and had a few problems on the night.. trail and error. Nothing beats an a nice live room though the Courty requires a PA. Our favourite MC / Juggler funny guy Joel Salom managed to juggle 3 ukes for 2:28 before being put off by the flash photography (better luck next year).

Fiona Knight and Chad Sheather came down from up north to play three great tunes. Fi’s singing was very strong and she made a meal of Meatloaf’s ‘2 Out Of 3 Aint Bad’, Patsy Cline’s ‘3 Cigarettes in the Ashtray’ and ‘You’re So Vain’ by Carly Simon. Chad’s noodle-style picking was very tasty also.

Misty Henderson graced the 2nd set with ‘3 Little Birds’ and her own calypso love song ‘Island Boy’ with ‘I Can’t Help My Self’… such a talent at only 14 years old. She is a great singer and is so very grounded in her delivery for her age. The band were on fire… then ‘ol mate Ash Bell (Starboard Cannons) floored everyone with laughing fits during his rendition of ‘3 Times A Lady’. It was great to see people standing and rocking out on the ukes to ‘Johnny Be Goode’ adorned by Warren Earls‘ tasting and fluent lead work. Miss Amber did a great job of 3 Dog Night’s ‘Joy To The World’ to bring the night to an end.

Great cake by Miss Amber and Deb.. Great sound by Luis Christia as usual. Thanks to The Couthouse Hotel for hosting the event for 3 years in a row. Thanks to all who attended the evening. It was the biggest and best crowd we have had thus far. It was really great to see faces who haven’t been in a long time. Welcome back and Happy Birthday to Us!