This was the final official UKE NIGHT of 2018 and a good chance to choose our favourite songs from the year. Miss Gittins on wind and Roddy Coe on bass were on board along with Evan Sun on other stringed things and we were thrilled to have Jaime Pattagalin back on drums.

The setlist was largely chosen by the Uke Mullum Community and was a very well rounded selection of quality tunes with a varying degree of difficulty. It was a lovely way to wrap up the year.

The Live Stream of the sets are available here: Check em out: SET 1 |  SET 2 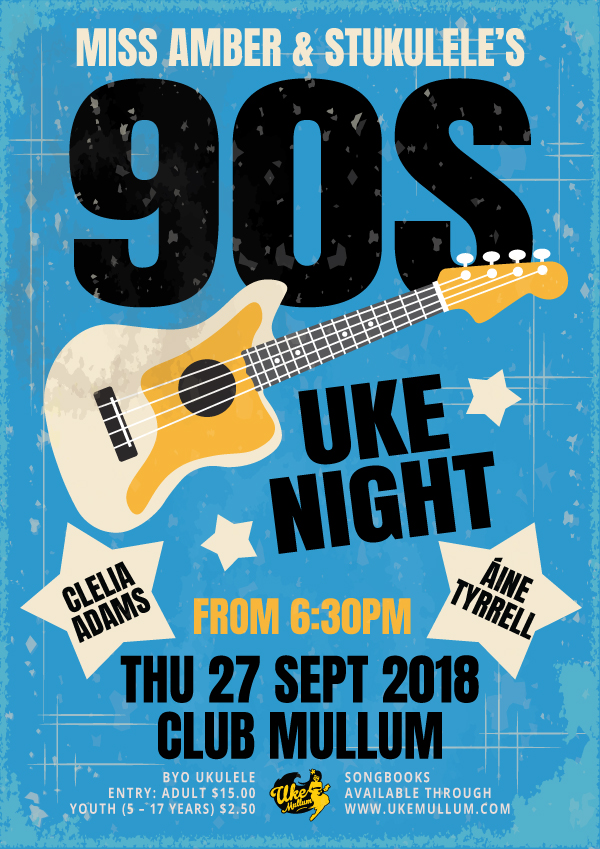 Hello dear Patrons. Heartfelt thanks for your support in keeping this  monthly community event alive. Thanks to those of you came along to Club Mullum on the night and those of you who tuned in to our youtube channel for the live stream:  SET 1 | SET 2

This month was 90S UKE NIGHT… we had a great night.  Big thanks to Kate Gittins on wind and squeezebox, Evan Sun on Guitar, Jason Caspen on drums and Julian Smith on bass.

It was great to have local and international Country Music Queen – Clelia Adams back as special guest vocalist. Ever resilient and versatile, ‘Clel’ has been recovering after a major operation and was excited to be performing some some non-country repertoire with us.

Sadly the amazing musical artist of Irish descent Áine Tyrrell (pronounced ‘Onya’) couldn’t make it on the night due to being hospitalized with medical complications. We hear she is OK just needs time to take it easy and recover. We’ll have to try again when she is back in good health.

The final songbook of what we performed is attached below. Hear the tunes by the original artist in our Spotify Playlist 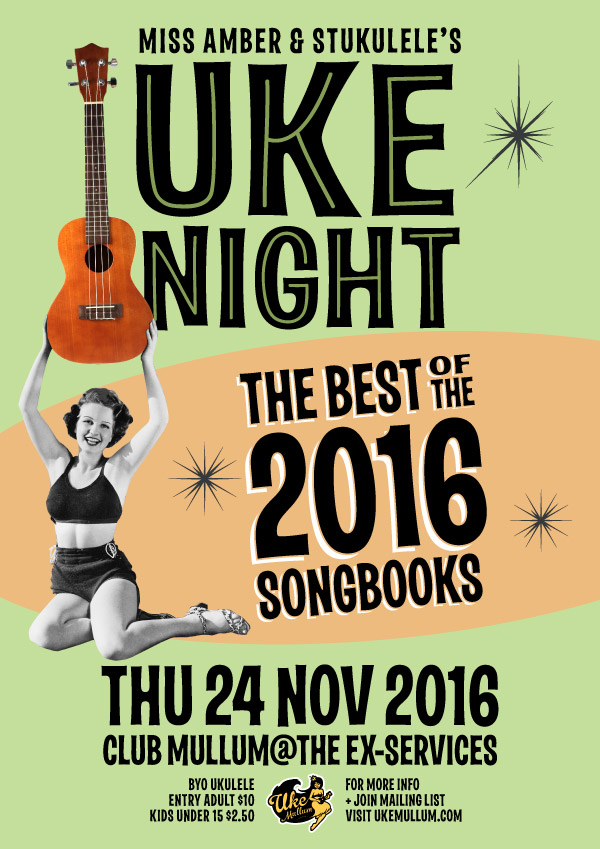 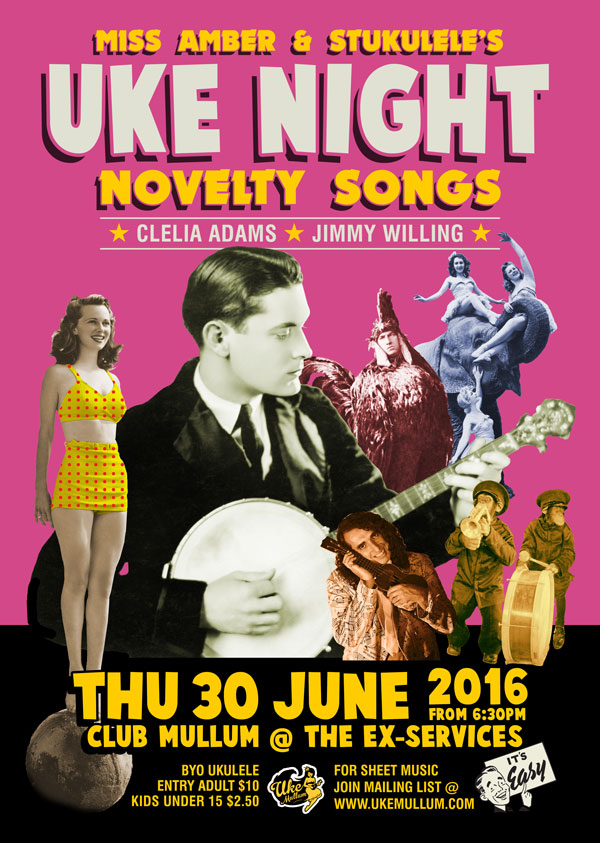 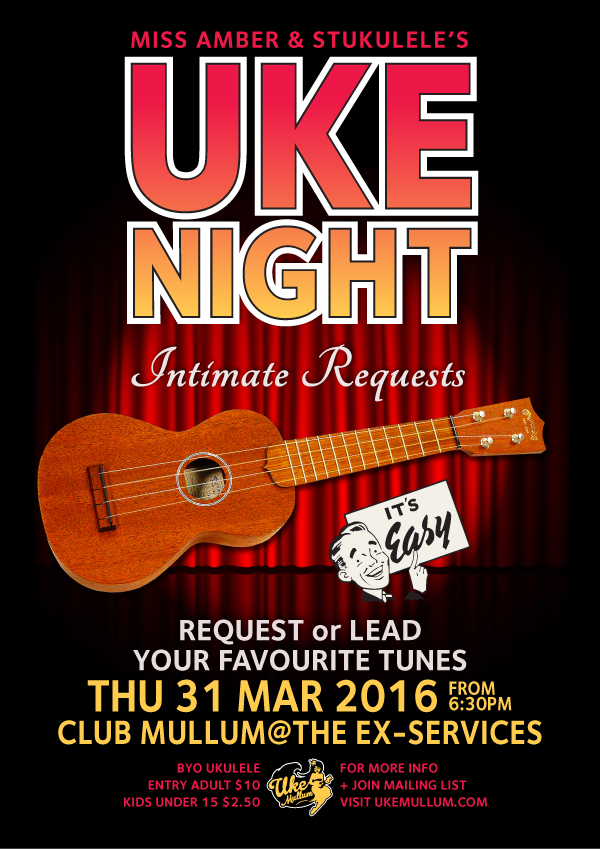 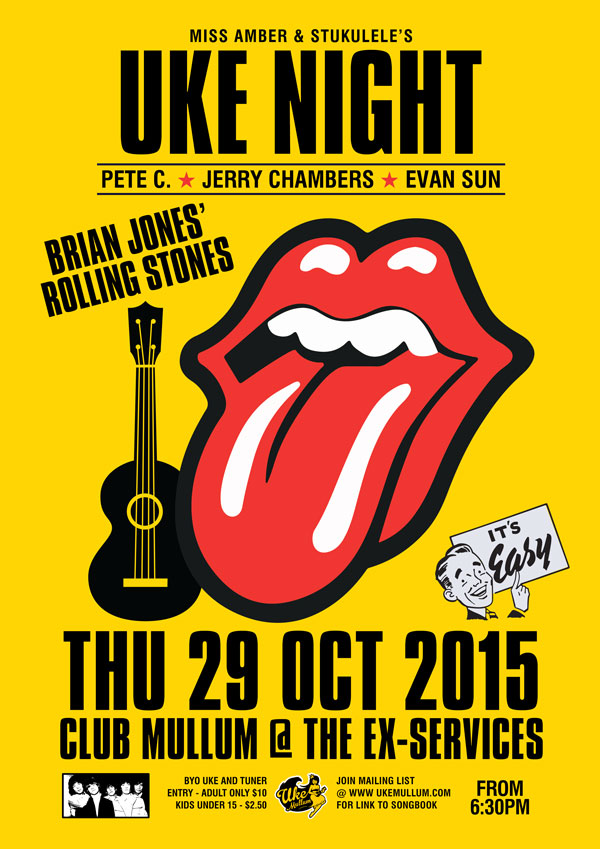 This was the third show at out new home in The Ex-Services club. I was worried sick that no one was going to show up. The publicity had a hitch and it was a rainy night. Just as we were to go on stage, the room started filling up and bang… It was a superb evening. The band was cookin’ – a real nice rockin’ sound.

Miss Amber sang well and really enjoyed herself, I think partly because Maria Stratton was back on violin, percussion and BV’s, the pair were like naughty school girls. Our guest vocalists Pete C and Jerry Chambers were just perfect for the evening. Just the right attitude and tattoos. Al Brooker was the man for the job on bass and Rex Carter on drums made a fine Charlie Watts.

Much kudos and respect to Evan Sun who had all the right guitar tones and the licks and solos worked out brilliantly. Went off without a hitch. Some mighty cheers from the crowd and the participation was excellent, with great choir work. Erina Leech got up again for the second consecutive uke night and sang a wonderful version of “As Tears Go By”. Great sound from Luis.

Much gratitude to all who helped including Deb on the door, Luke from the club and Cristine Sharrat. Sista Mary remarked at the end of the evening, Uke Mullum has now made the club it’s home. Could not be happier with how the night went. 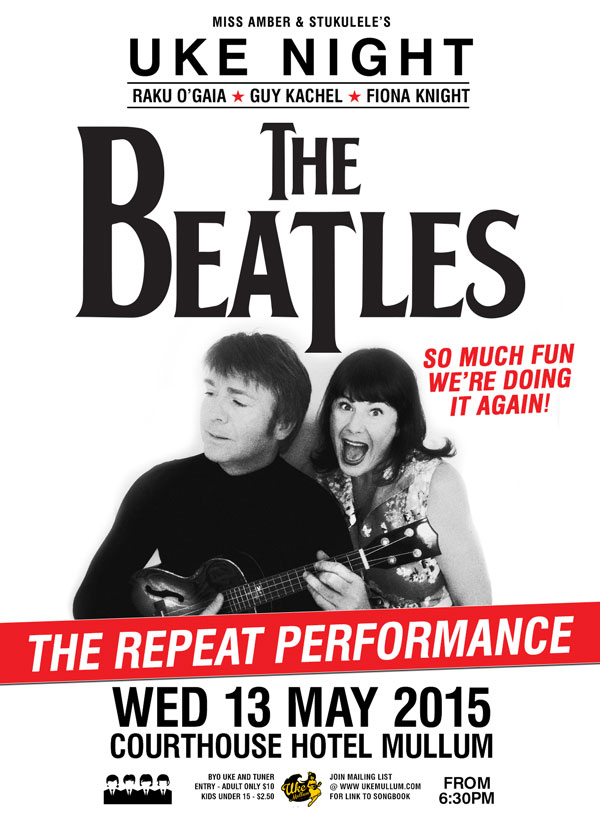 Amazingly, we had a great turn out and most of the audience were newbies… (they didn’t come to the first night). The band were on fire with the luxury of having performed the songs once before. Fiona Knight again rocked the house… she found her special growl that she doesn’t know how to reproduce in any other circumstance other than singing ‘Twist and Shout’.

Clelia Adams came along and sang harmonies and lead on ‘Yesterday’…. It was a show stopper. Guy Kaychel and Raku O’Gaia again excelled and most notably was the applause Evan Sun received for his solo in ‘Something’. We even pulled out ‘Birthday’ for an audience member who was celebrating his birthday, (Happy Birthday Mason!)…

A great night and well worth repeating. As one of the happy throng commented.. “It was gear!”