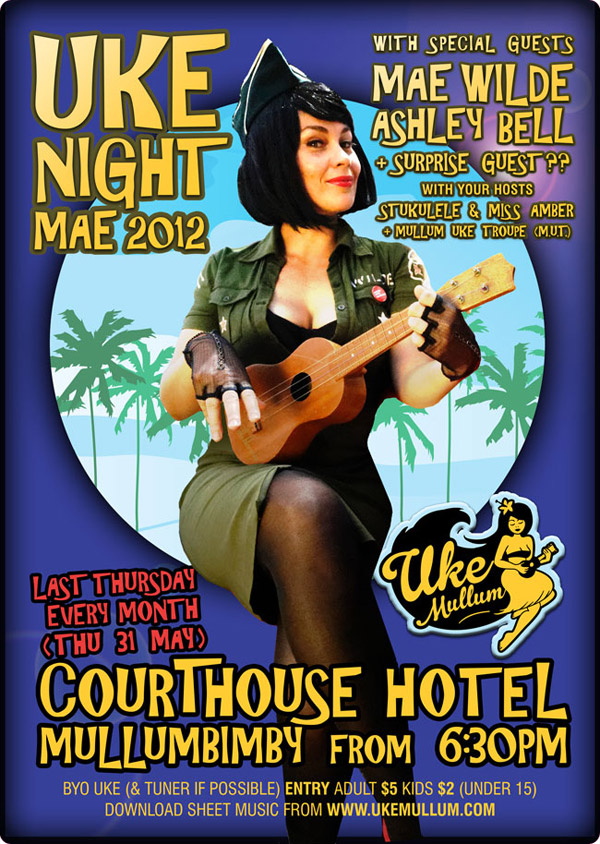 Thanks to all who came last night. It was a big one, at least one hundred folk in the room. Why is it we have a big night every time Mae Wilde is involved? There were quite a few songs that a lot of people had never heard of before in the songbook. That’s not such a bad thing right? The Uke Night at the Courthouse is a performance night, so it’s great the setlist has current tunes. Rod Coe and Jason did a great job again keeping us all together.

Ashley Bell’s version of Lonely Boy (Black Keys) was stirring, It was also the first appearance of ‘Dorothy’ , Clare Campbell’s new electric red ukulele. Michael from Gold Coast Ukeleles lent a fag pack amp that distorted the crap out of  Dorothy… She sounded like a plane taking off.  After the performance a remark was heard “that was the most indulgent thing I have ever seen.” Mission accomplished I reckon.

A big thanks to Green Ukulele who donated two beautiful T-shirts for our raffle which helped to pay for our guest artist and poster girl. Looking forward to next months all girl three part harmony night.