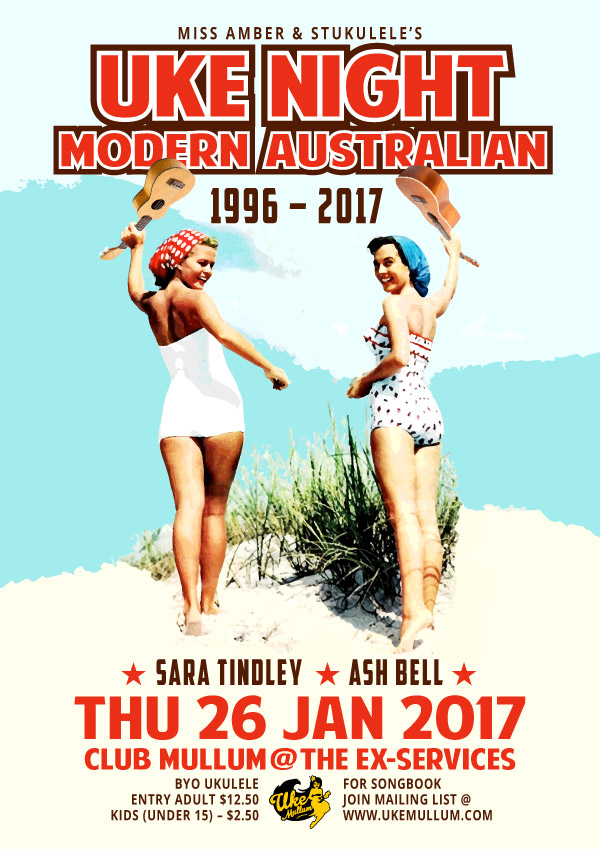 Thanks to everyone for coming to the Modern Australian UKE NIGHT. It was in the end a fantastic evening albeit with a late start and even later finish. I was up at the crack of dawn and so was our trusty sound man Luis Christia and Door Technician Deb Stoker at the Brunswick Heads Breakfast in the Park Australia Day celebration. The NRUO was leading the songs for the forth year in a row. So we were a little pooped.

This book featured Australian songs from the last 20 years. So not surprisingly some folk had never heard of them. This was the exact reason I did the book. It seems ludicrous that songs most people want to hear and play are the ones they know, usually from their youth when they first fell in love with them. While I understand why that is, in the past 20 years 10s of thousands of songs have been written… some real treasure too. We must keep moving along folks.

With this in mind I thought it important to have some young folk up on stage with us. Local band 100 Words consists of 12 year old – Miller Stuart-Long, (fantastic singer / song writer in the making), Jack Edmonds and Sam Sanders. These guys share the instruments around and have learned how to hold it down and keep it tight. So refreshing to see. Milly sang with daughter Rose Eadie on ‘Big Jet Plane’ before the band got up and played two original songs. Also Sonny Flynn played trumpet. What a great feeling to share the stage with these young musicians. Sam Sanders was actually in the UKE NIGHT band as guitarist and did a mighty job with a talent way beyond his years, playing some wicked riffs and solid grooves and solos on songs he heard for the first time the week before.

The first half of the show was full of pop songs from Australian bands and solo artists, including the wonderful message song ‘Caught In The Crowd’ by Kate Miller-Heidke. Guest vocalist Sara Tindley’s daughter Poppy Baily-Tindley sang this one with Rosie – they were amazing. Both Miss Amber and Sara sang harmonies with the girls unable to contain their proud mother smiles.

Brad Green won the highly coveted poster in the raffles and Noel won the two tickets for next month. Barb won the Australia Day ukulele and promptly told Miss Amber to bend over so she could show her were to stick it. (Barb is over 80 and doesn’t fancy learning I guess).

The 2nd half of the show was more singer songwriter flavoured, perfect for our guests Sara and Mr Ash Bell. Ash is having a break from performing at the moment and it was so great to hear his voice again. See clip of Ash singing Paul Kelly’s ‘They Thought I Was Asleep’. A few people had left by now as it was getting late so it was a very special intimate 30 minutes, finished of by a rockin’ version of  ‘Are You Gonna Be My Girl’ from Jet sang by Sara, who can belt out a rock tune with the best of them. (I love when Sara Rocks out)

There was a lot of learning from the musicians this month and I really appreciate the time and effort that went into recreating all the little details. Brilliant keys from new comer Dan Brown who was the perfect man for the job with the ability to pull authentic synth sounds one minute and beautiful piano solos the next. Thanks To Al Brooker and Jason Caspen for their exceptional rhythm section work. The night was ended with a soulful version of Nick Caves ‘Into My Arms’ with impromptu 4 part harmonies in the last chorus. We were packed up and out of there before 10pm. 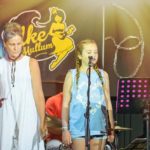 Poppy and Rose with Mums – Sara and Miss Amber 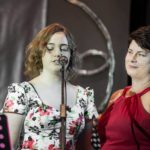 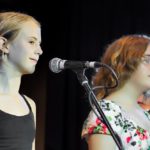 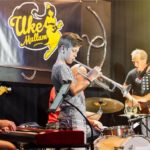 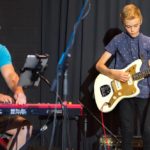 Dan Brown on keys and Sam Sanders on electric guitar 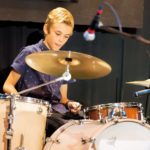 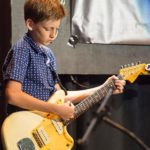 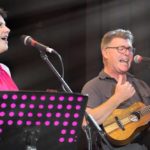 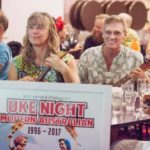