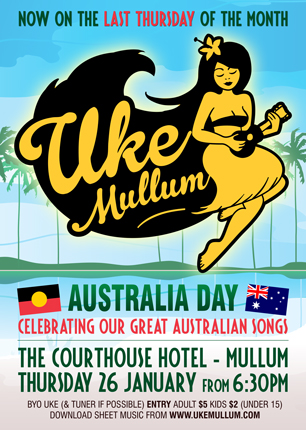 Thanks to all who braved the conditions and made it to the Australia Day 2012 Uke Mullum Celebration. In spite of the nasty rain and flooding it was a great turnout. The reports and facebook messages were favorable and made mention that there was a good mix of white and Aboriginal Australia represented in the songs chosen (well done Miss Amber for Secret Country by Karma County).

Special guest Sara Tindley lead memorable renditions of  ‘My Island Home’ (the original Warumpi Band Version), Archie Roach’s ‘Took The Children Away’ and ‘From Little Things Big Things Grow’. John Fog of Ragga Jump lead us in a reggae versions of ‘It’s A Long Way To The Top’ and ‘Land Down Under’ as well as playing the part of Jeremy Oxley with a blistering lead solo in ‘Alone With You’.

Other guest vocalists were, new comers: Morgan (‘The Ship Song’, ‘Alone With You’ and ‘To Her Door’) and Mark Virtue on ‘Two Little Boys’. Special Thanks to Chad Sheather for his picking and solo work, Paul Brewer on Bass and of course Luis Christia for sound and projection. Special mention for Pete and Robyn Quinn who were definitely in the spirit with some outstanding Australia Day Attire.

Next Month the theme is ‘When Valentine’s Over’. Stay tuned for more soon.