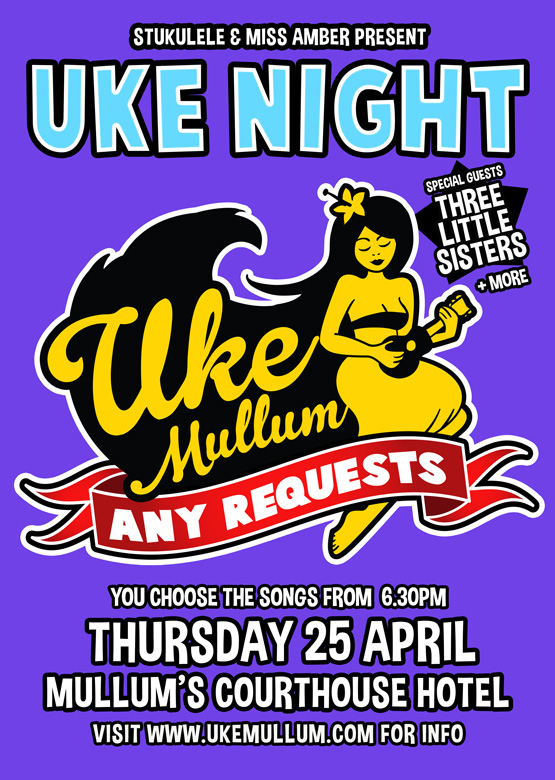 Great night had by all…  wonderful performances by Dave Sanders on drums, Rod Coe on Bass and Kim Moxham on wind instruments.  Awesome job on sound by Chris Chandler (who can’t help but make himself part of the show) and everyone again was blown away by the spectacular harmonies of Three Little Sisters. (what are they putting in the water in Clunes… that Brandolini family are mighty talented).

The most popular song in the poll 2 years in a row was Pumped Up Kicks… such cool tune about a sadly grim subject… there were 29 separate votes and it was revealed that Miss Amber voted twice. Still the song list was a great mix of old and almost modern songs and everyone seemed to enjoy playing and listening. Heather Jacks was treated to a uke-ful rendition of Happy Birthday. Her husband Jeremy blind folded her and lead her into the venue as we sang to her… great reaction when Heather took off her blindfold to see all her friends and quickly realised she knew only 3 or 4 people in the room… all these strangers smiling and playing Uke. The Lucky Door prize was won by a visitor from Dresden, Germany who was tatooed just that afternoon in Byron Bay.

The Courthouse is a great venue for Uke Night. It has a real family atmosphere. Unfortunately some people in our community don’t feel the need to support the efforts of the many people involved in putting on such a great evening of entertainment and after “just coming in to dine”… they stay all night and enjoy the show for free. The bar and the restaurant don’t want to turn away customers so the night relies on the honor system to cover costs. That means we are hoping people will be honest and, if they hang around and watch the show, they will pay the $10 entry fee. Many people don’t and that’s just not fair for all concerned. This may spell the end for UKE NIGHT at The  Courthouse as a result and after next month we may have to move to a different venue.